Until now, character images in A Case of Distrust have been static. A player would choose to talk to someone, then the screen would transition to a still of the character’s face:

To keep with the Saul Bass poster art style, most of the game features stationary images, or only subtle animations. The static character art worked very well with this style! But, something felt off. Since much of the game involves conversation, players would see these images for extended periods. I realized that the longer a player spent in a conversation, the less appealing the art became.

But I didn’t want to shorten the conversations, either. In-depth characters are the crux of any good mystery, and conversations are the player’s window into a character. That was when I remembered: Hotel Dusk!

Hotel Dusk: Room 215 is a mystery game for the Nintendo DS, released almost 12 years ago. Its art-style is inspired by graphic novels — more static than your typical game art. But rather than keep their images completely still, the developers give every character a few canned emotions, each with a some choppy frames. Hotel Dusk keeps its physical aesthetic while adding flavour to the conversations.

Exactly what I want! But my characters, while simple silhouettes, still look more realistic than the ones in Hotel Dusk. Each of my characters is either directly referenced from a photo of a real human, or an amalgamation of photos. In order to keep that aesthetic, I had to change from using photos to using video:

Above is the first video I used for a test. It’s my beautiful girlfriend! I asked her to perform a basic action as reference. From there, I selected a few frames and used a similar technique as I did for the static images: solid blocks of colour with paper masks overtop and underneath. Voilà:

That’s exactly what I wanted! It still fits the art style, yet adds movement so the image doesn’t become boring.

But would I be able to do that for every character? I’m in Denver, I don’t know that many people around here. Thankfully, I have a great friend back home who owns her own production company and runs an improv group! What a break! She agreed to film her actor friends performing the various roles.

Say hello to Virginia Woodall, officially the third person working on A Case of Distrust: 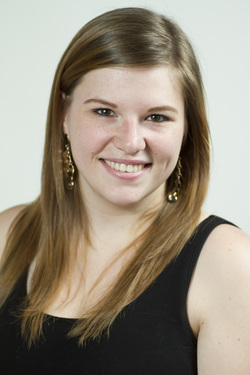 She’s our Talent Coordinator, gathering actors to play many of the game’s characters. I shared the first fruits of her labour on Twitter earlier this week — a GIF of the new Connor Green, played by Toronto stage actor Colin Roberts:

I’m excited for this new art style! I’m sure A Case of Distrust will be leagues better because of it! Thanks for reading, more updates soon!

(Also, working with silhouettes is fun, because costume colours don’t matter at all)